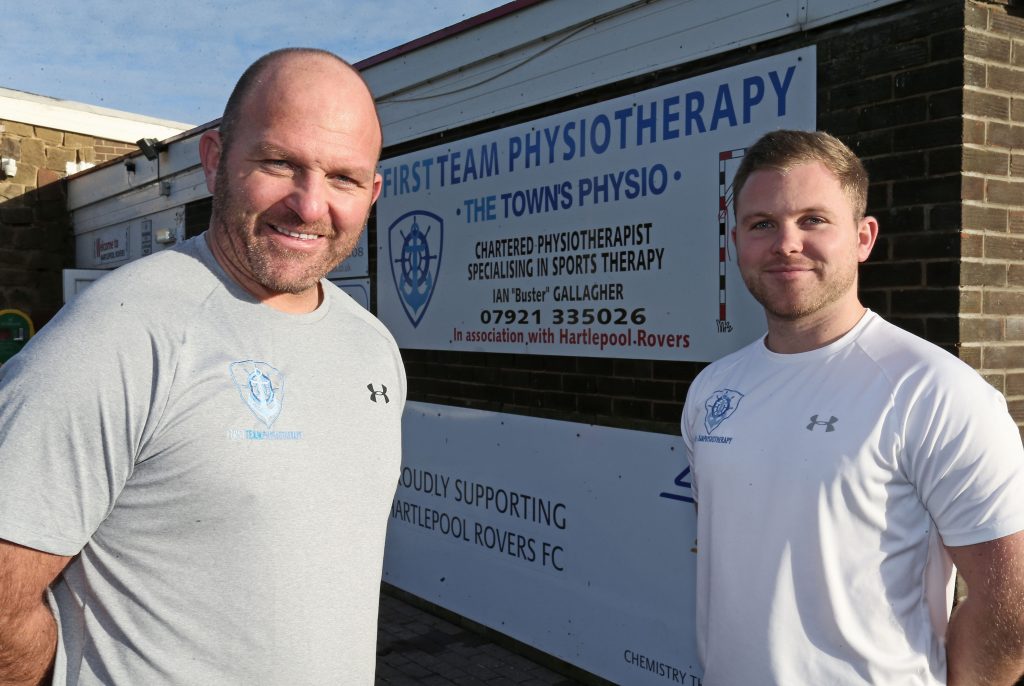 Ian Buster Gallagher with his son Liam outside one of First Team Physiotherapy’s clinics at Hartlepool Rovers. Picture: Ian Horrocks

Ian ‘Buster’ Gallagher has celebrated the official launch of his father and son First Team Physiotherapy business with the opening of a second clinic.
Concentrating on building his own firm was why Buster, the long-serving former Hartlepool United physio, decided to end his time at Victoria Park.
Now he is excited about what the future holds working with his son, Liam, across the town.
First Team Physiotherapy has marked the start of the new era by announcing that as well as its Hartlepool Rovers’ HQ there will be a second clinic at BrYal NE Ltd in Whitby Street South, Hartlepool.
Buster said: “It’s fantastic. I will always be grateful to Rovers for allowing me to work out of their Friarage home on West View Road and through those links I have opened the second clinic.
“We have teamed up with Rovers stalwart Brian Robinson so that we have somewhere for people to go in the south as well as the north of Hartlepool now. I can only thank Brian and Rovers for all of their support and I am looking forward to seeing that relationship flourish.
“Nobody will ever understand how hard it was to leave Pools. It was an absolute honour and privilege to have worked for the club I have supported all my life.
“Now it’s time for the next chapter and the thought of working with Liam and building up First Team Physiotherapy is really exciting for us both.”
Buster started playing for Hartlepool as a YTS in 1994 and 27 years later he was part of Dave Challinor’s backroom team last summer when Pools returned to the Football League.
He said: “I will never forget my time at Pools. I will always want the club to do well and I will be going back to the Vic regularly to see the team play.
“I learned so much as a physio and about dealing with people while I was at Pools and I will be putting that knowledge to good use as I look to help even more people around Hartlepool with Liam.”
Buster and Liam will be working with sports clubs across the town and in occupational health. First Team Physiotherapy also works with individuals and offers home visits to clients who find it difficult to leave their homes.
Liam said: “It’s a really exciting time for us both and the business. We have been looking to do this for some time. We have discussed it a lot while I was in training.
“Since qualifying as a chartered physiotherapist earlier in 2021 we have been planning this moment and we already have an established client base.”
To book an appointment or for further information check out firstteamphysiotherapy.co.uk

“I learned so much as a physio and about dealing with people while I was at Pools and I will be putting that knowledge to good use as I look to help even more people around Hartlepool with Liam.”
-Ian Buster Gallagher, Owner, First Team Physiotherapy 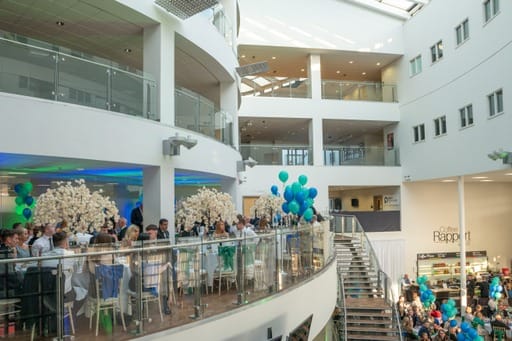 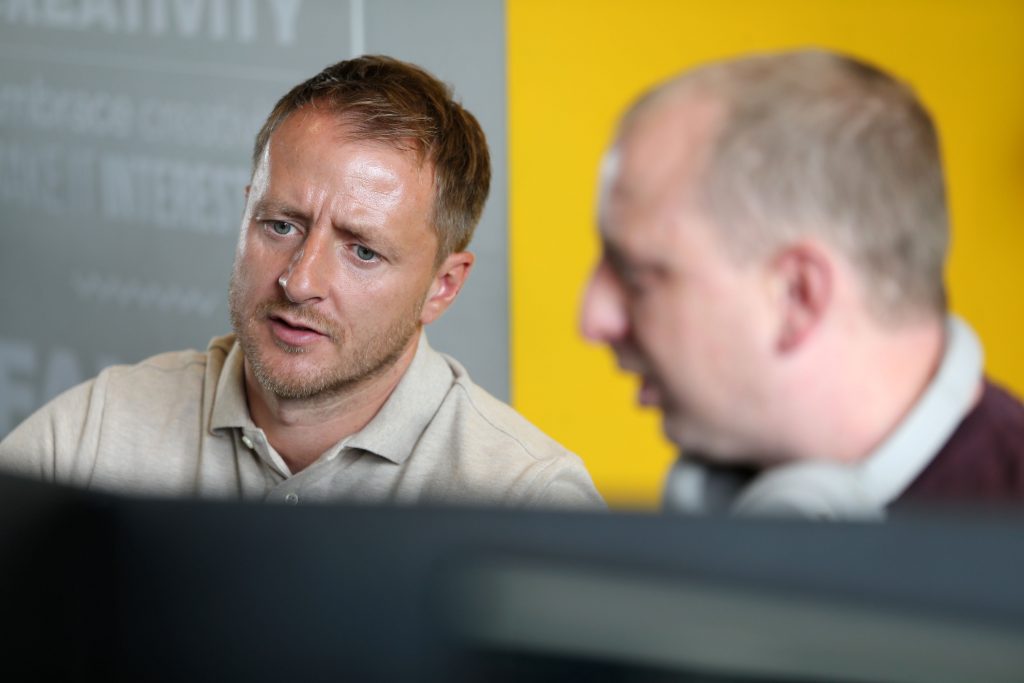 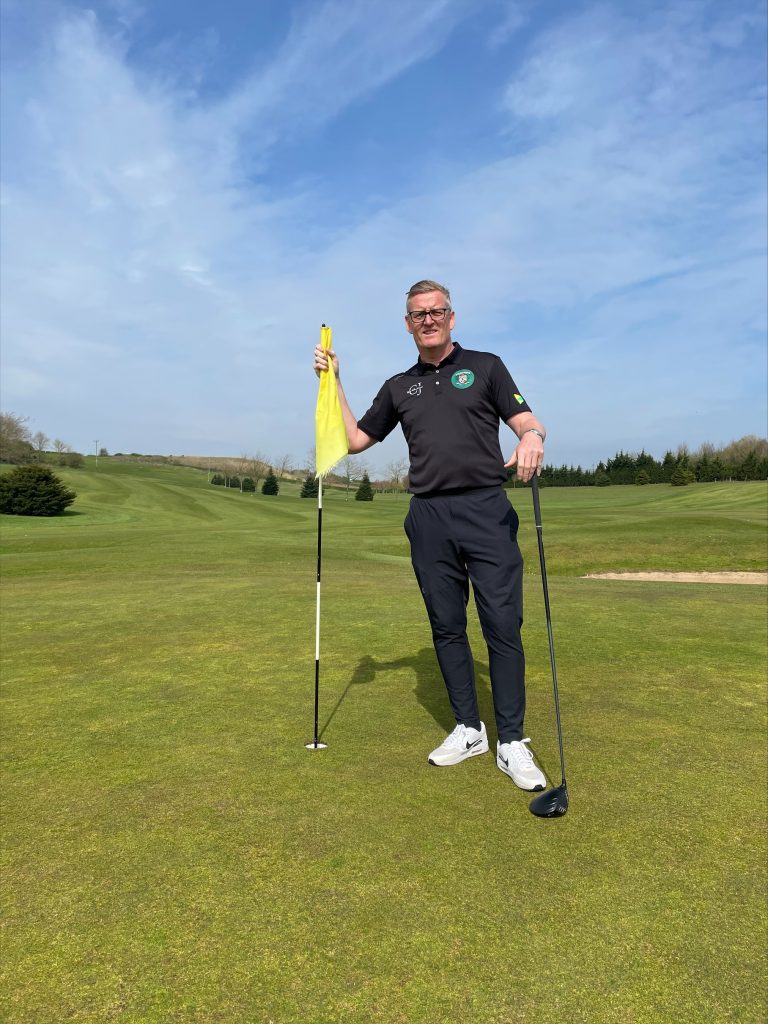